Bitcoin: Buy Some Today (but only a little) 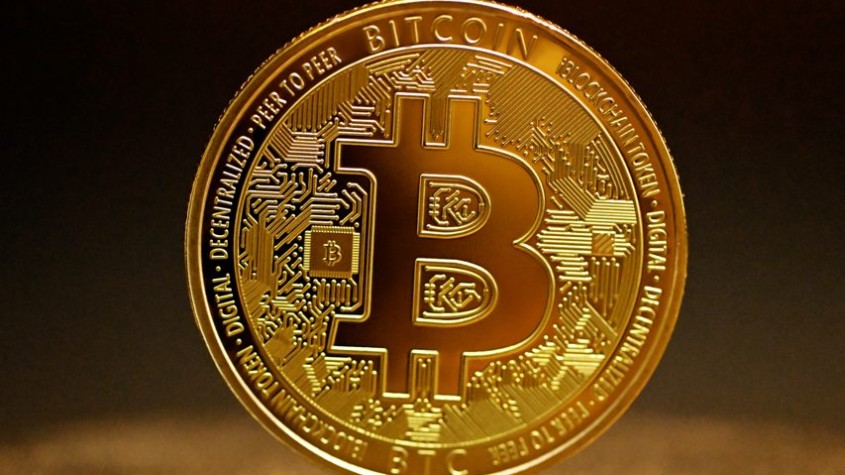 I wrote about Bitcoin previously. You can see my original article here. I have learned more about Bitcoin, more about investing, and I have been able to look at Bitcoin through a different lens since writing that article.

The main part of my increased knowledge about Bitcoin has come from one of my favorite, if not my absolute favorite, podcasts called EconTalk. On an episode of EconTalk, host Russ Roberts interviewed Bitcoin evangelist and Xapo CEO Wences Casares. The interview was both interesting and informative. You can access the interview as well as a good amount of extra learning material here. I highly recommend that you listen to the interview and read some of the material on the website if you are interested in Bitcoin or are planning to make a purchase.

In the interview, Casares discusses many things but what I want to focus on here is Casares’s postulation that purchasing Bitcoin is a very low-risk/high-reward endeavor. Casares believes that there is a non-trivial chance that Bitcoin will grow in popularaity and become a global currency. Even if 1% of global trnsactions are done in Bitcoin, Casares argues rightly that Bitcoin’s value will grow immensely in value. This is easy to understand. If 1% of global transactions will be done in Bitcoin at some point in the future, the total value of all Bitcoin in existence wold equal (0.01)(x), x being equal to the total value of all of the transactions done in that future year. If we include black market transactions, the value of Bitcoin will be even higher. It is important to remember that an inherent property of Bitcoin that separates is from every other national currency in existence is that Bitcoin are generated at a predictable pace and after a certain year, no more Bitcoins will ever come into existence. Therefore, Bitcoin cannot be deflated like the US Dollar, the Euro, the Yen, or any other national currency can. We can see that as the value of global transactions rises, the total value of all Bitcion in existence should rise (assuming Bitcoins comprise a stable percentage of all global transactions). So, if Casares is correct in saying there’s an non-trivial chance of Bitcoin taking off and becoming a means of exchange for a significant (even 1% is significant) portion of global transactions, the value of each individual Bitcoin will rise tremendously. Casares believes that in the next few decades a single Bitcoin could be worth $1 million USD. That definitely sounds crazy in 2022, but it isn’t at all crazy if Bitcoin takes off.

Of course Bitcoin has a very high probability of not taking off. Casares acknowledges this, but this acknowledgement doesn’t stop him from recommending that individuals should purchase a few Bitcoin. He argues that purchasing a few Bitcoin will cost less than $1000 as of the writing of his post (this will obviously change as Bitcoin fluctuates on a daily basis). A person who takes Casares’s advice now has two possibilities for his or her future as depicted by the tree below. 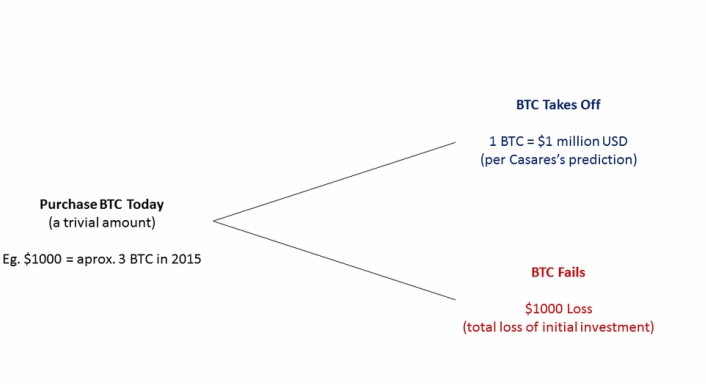 The above options are different than investing in stocks, real estate, or commodities. Investing in those things requires a large up-front investment and historical growth rates for those investments are nothing spectacular. With Bitcoin, a very small investment is more than sufficient to position you to take advantage of a potential meteoric rise in the value of Bitcoin. If Bitcoin takes off, it will be much more valuable than it is today. It could potentially make you a millionaire off a $1000 investment in a decade or two. Thinking about it this way reminded me of great investor and author Monesh Pabrai and his book The Dhando Investor. In it Pabrai describes the concept of Dhando, a concept that echos Warren Buffet’s investing style. The concept of Dhando mean taking calculated risks that have extremely limited downside potential while having extremely amazing upside potential. By using the concept of Dhando with skill an investor can take risks that are of a very particular variety, the kind where making a mistake doesn’t mean disaster. To be Dhando is to be like Pabrai or Warren Buffet. To be Dhando is to take those risks that have very little downside but very big upside potential.

Casares’s recommendation had Dhando qualities. It is a recommendation that is geared toward a Bitcoin investor entering into a position where his or her downside is limited but where the upside is great. Although the chances of winning here are slim, it is Dhando because it preserves your wealth and positions you into a place to profit should things go well.

This is now how I view investing or purchasing Bitcoin. I don’t know much about Bitcoin mining and I almost have no use for Bitcoin for use in making transactions at this stage. I view Bitcoin as a Dhando endeavor where I can place my bet and think of it no more. In a decade or two I’ll either be rich or I’ll be indifferent about it. It takes a small amount of time and about $1000 for me (for you it might be a different amount – BUT it should always be an amount that allows you to remain Dhando – meaning an amount that you will be pretty much indifferent about losing should Bitcoin fail totally).